For this #FlashbackFriday I thought we might dive into some pretty cool snow images from the past. I have had these images saved for a while now because I really wanted to wait until we had some snowy weather to compare them to, and boy did mother nature deliver! Students are walking through about five inches of snow to get to their classes today after the snow filled few days we have had! Snow on campus is something that every group of students will experience while studying here at Iowa State University, and while some students love the snow, others are less than excited by it.

Here are students walking from Curtiss Hall to Beardshear Hall on central campus in 1979. While there is no other date information for this photo, it looks like they were getting some pretty serious snowfall. This scene could have been recreated yesterday with the amount of snow students were walking through at the end of the day. This photo and more snow scenes can be found in box 328 of RS 4/8/J. Currently it is not snowing, but I can see my fellow students trying to navigate the frozen world outside. Here is a look at what the view from my window on the second floor of the library is right now! While most of the students are at their early morning classes, a few are walking the sidewalks, trying to get places with the two inches of snow we gained last night. 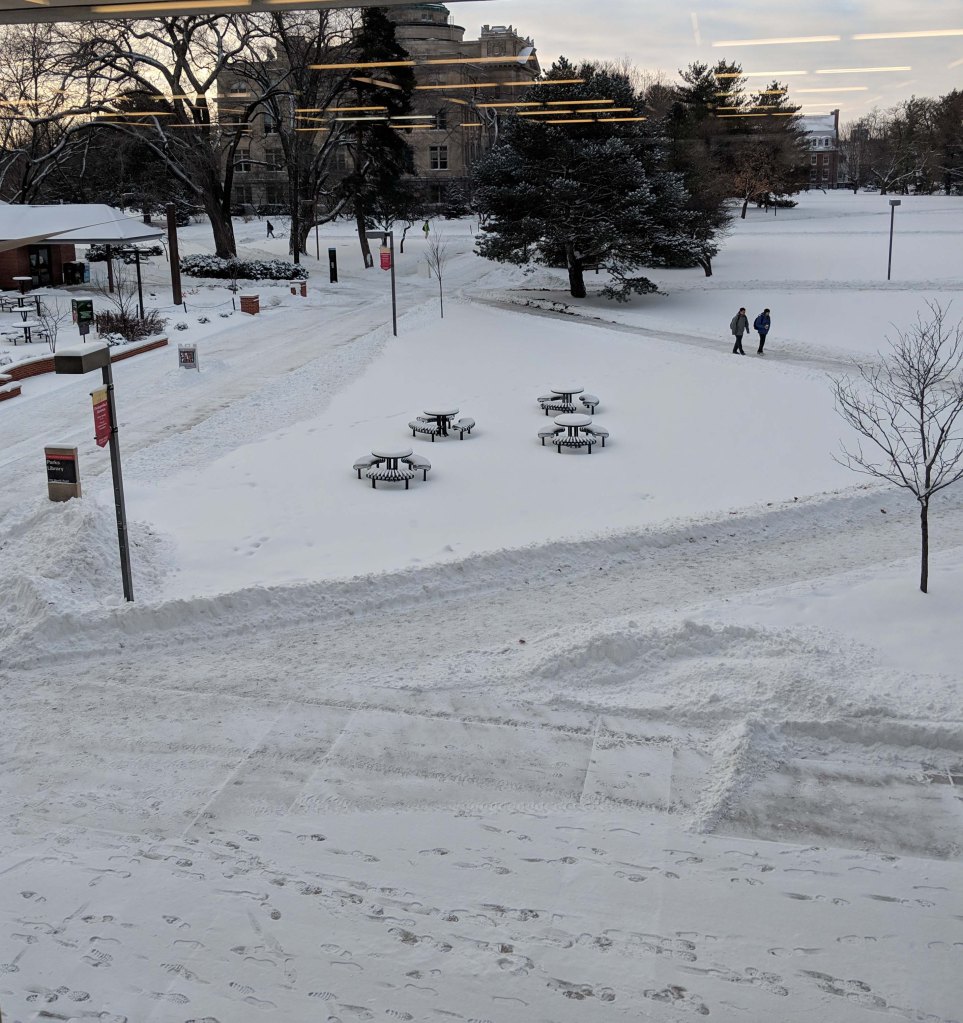 Another cool photo that I found while looking through box 328 of collection RS 4/8/J – Snow Scenes, was an almost identical photo from the first group of students walking in the snow, only this one is from 1994! These students look a little more excited about the snow, and it looks like there was less snow compared to the photo from 1979. How cool is it though that we have two almost identical photos from two separate years? I love finding these connections in the archives, you truly never know what might turn up!

Winter in Iowa can prove challenging!  Be careful out there and remember that each day that goes by gets us one day closer to spring.

Staying in to avoid the cold and ice? Check out the digital collection of the Bomb, or better yet, help us transcribe it!

Currently there is very little snow on the ground and it’s a windy but sunny 37 degrees Fahrenheit. However, today’s Throwback Thursday picture shows an entirely different scene. Below shows a snowy day, likely in late January, with students having a toboggan race during the 1949 Winter Carnival. Check out our previous post about the Winter Carnival.

The reading room is closed tomorrow and Monday January 2. We are back to our regular hours Monday-Friday beginning Tuesday, January 3. Drop by and see us!

Winter is officially here! Whether you love it or hate it, you have to admit that the snow can be quite beautiful. This photo provides just one example. Behind the snow-frosted trees are two buildings – the English Office Building (home of the President’s Office) on the left and Old Main on the right. The English Office Building was located roughly where Carver Hall now stands.

If you want to see a great view of wintry campus while staying out of the elements, stop by our reading room! While you’re here, you can take a look materials from any of our great collections. Stay warm out there!

A zoology student approaches a rather grumpy seal, 1969 or 1970. University Photographs, Box 605

It may be surprising that this land-locked university has a photograph of a marine mammal in the archives. Nevertheless, we do! The photo above comes from the Department of Animal Ecology photographs, RS 9/10. The Department of Animal Ecology separated from the Department of Zoology and Entomology in 1975, which explains why the student above is labeled as a zoology major. I’m not sure what exactly is happening in this photo, but this student is doing some sort of research involving this seal – and the seal doesn’t seem very happy about it (rest assured, the seal is not being harmed).

‘Tis the season for cold and snow. We may not have any snow at the moment, but it will come. And when it does, some people will hole up inside as much as possible, and others will run outside to play in it. The people in the above photo chose the latter. Skiing was one of the many activities offered during Iowa State’s Winter Carnival, held in the school’s earlier days. This particular photo was taken during the 1949 carnival, held in late January. Other activities included toboggan races, ice skating, and tug-of-war… on ice.

Rather be inside? Stop by and explore any of our available collections while enjoying a great view of wintry campus in our reading room!

Students returning to campus this week for the start of spring semester were greeted by a campus scene not unlike the photo below:

With sub-zero wind chills, frozen lakes, and piles of snow, it seems a long, cold trudge until spring break on sunny tropical beaches! Special Collections wishes everyone warm thoughts and a prosperous and productive semester!

We’re back! Classes don’t start for another week, but we are here and ready to go. Let’s start the new year off with an image from the Descartes Pascal Papers, MS 91:

This glass plate negative shows a group of gentlemen posing for the camera while out ice skating somewhere in rural Iowa. The cold didn’t stop these guys from having fun! This photo and several other from Pascal can be found on our Flickr site, and more information on photographer, farmer, and seed corn breeder Pascal can be found in this online exhibit. And, of course, this image and many others are available in our department, so stop in, warm up, and have a look!

Last week, Kim had some fun arts and crafts project ideas from the archives to keep our hands busy while it snows. If I’m telling the truth, my favorite thing to do when it’s snowing is… watch the snow. Since it’s not currently snowing, I’ll content myself with some photographs, like the one above of Morrill Hall dated around 1905.

If I do have to go outside, though, good company is important. These women outside Lyon Hall in 1979 are making the most of their winter wonderland adventures – which most likely include class! 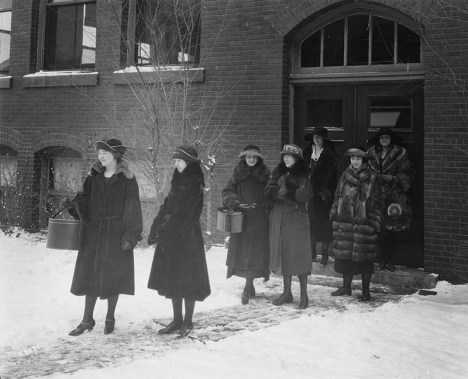 It probably comes as no surprise to anyone around here that Punxsutawney Phil saw his shadow on Sunday, predicting 6 more weeks of winter. After weathering two “polar vortices,” and with more snow today, Iowa State students have been having to bundle up this winter. Stay warm and dream warm thoughts of spring!

In this photo, Iowa State students from 1915 are wearing heavy fur and wool coats and hats as they leave a building on campus.

For more historical photos of student life, check out the Student Life photo set on our Flickr page.