Here’s a #FlashbackFriday looking back on when the London Orchestra came to Ames, IA in 1974!

The London Symphony Orchestra came to Iowa State during the Ames International Orchestra Festival in 1974. This was the first year the festival featured an orchestra from outside the United States.

The orchestra performed several sold-out concerts in C.Y. Stephens Auditorium, each with a different soloist. Sounds like an incredible event!

If you’re interested in reading more about past Iowa State highlights, all copies of the Bomb are available digitally!

We’ve arrived at the end of Jazz Appreciation Month, so I thought it would be nice to draw attention to the Floyd Bean Papers (MS 55). Bean was a jazz pianist from east central Iowa (Ladora and Grinnell). His first professional gig was playing with fellow Iowan, Bix Beiderbecke. However, his big break came in 1939 when he joined Bob Crosby’s band full-time. Throughout the rest of his life, Bean played and recorded with many other jazz musicians as well as composed his own music.

Below is an image of a jam session Bean (not pictured) had with two members of the Duke Ellington orchestra.

The collection contains Bean’s own arrangements and musical compositions, photographs of Bean and other jazz musicians (including personally addressed photos from Cleo Brown, Sidney “Big Sid” Catlett, and Earl Hines) and a variety of other kinds of materials documenting jazz and jazz musicians. It’s a great resource for Jazz Appreciation Month. We’d love to have you stop by and take a look! Also, be sure and listen to Iowa State’s own jazz band some time.

Students gathered around a piano, 1944.

Sometimes we like to share photos purely because we like them. This is one of those photos. I love it, even though I know little about it. All I know is that it is an example of student life at ISU in 1944 – but whether this is part of a class, extra-curricular activity, or just a regular social sing-a-long, I can’t say. Some of the reasons I love it include the era (the 1940s is one of my favorite decades, if not my favorite), the fashions, and the idea of an old-fashioned sing-a-long around a piano. Yes, today we have karaoke machines and video games that serve the same purpose, but it’s not quite the same. For a bit of extra fun, here’s a recording found online of the song next to the one they are playing in the photo (if I only knew what the open sheet music is!). Enjoy!

This photo and many others involving student life can be found on our Flickr page and in our photograph collection. Also, feel free to stop in and take a look at any of our student life-related collections!

Does it (or will it) look like this where you are this winter?  Not a time to venture outside without bundling up! I like to spend winter curled up on the couch, watching a mini-series, and getting some knitting/crocheting/beadweaving/tatting/weaving time in. Being a multi-crafty person I am always interested in finding “vintage” craft patterns, instructions, and ideas.

I gave myself the challenge of finding craft ideas from within our collections. This might seem quite difficult – our collections are strong in agriculture, science, and technology. However, we also document the University and so we have collections that match the major research and teaching areas on campus, one of which is the Department of Human Development and Family Studies. We also have the papers of alumni, rare books, and Iowa-related materials in other areas. So, after scouring our collections I’ve found several fun things you can do indoors this winter!

END_OF_DOCUMENT_TOKEN_TO_BE_REPLACED

Whitney’s recent post regarding the poetry of Iowa-related music has me in a musical mood. Studies have found that music can be motivating, which comes in handy on April mornings that arrive with snow on the ground. And the benefits of music education are widely espoused. The group crowded around the piano below are demonstrating the social benefits of music in 1944. 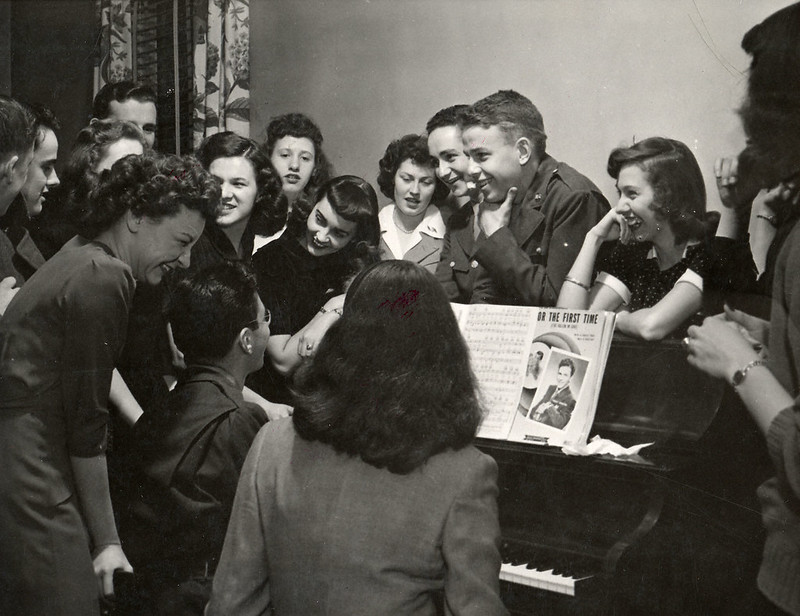 In addition to the Iowa Sheet Music Collection, MS 474, Special Collections is home to a number of other music-related collections including:

It’s National Poetry Month, and our department has several collections involving poetry. One of particular interest may be the Iowa Sheet Music Collection, MS 474, a collection of songs by Iowa songwriters and/or about Iowa. Songs, as you may know, are essentially poetry set to music (one could even argue that music is a sort of poetry, but let’s not go there today). Within the collection, the songs about Iowa truly showcase Iowa pride in the early 20th century.

Iowa pride. It’s an actual thing, though people not from Iowa may wonder why on earth anyone would be proud to come from this state. As someone who spent a couple years out of state, I’ve gotten my share of “what do you… like… DO there?” and “do you mean Ohio?” or, “oh, you grow potatoes there, right?” No, we are not Idaho, nor Ohio, nor should it warrant a disappointed or pitying reaction. I missed my home state quite a lot when I was in Indiana (even though southern Indiana is a beautiful place). Sure I missed my family, my friends, my dog, my favorite restaurants… but I also missed the land itself. It can be very beautiful with its rolling hills and patchwork quilt fields. But above all, it’s home. I love it, and lots of other Iowans love it, too. Now before I get carried away and go on and on about the understated awesomeness that is Iowa, let’s focus on other people’s love letters to this state – in that form of poetry loved so well, song.

“Iowa, Proud Iowa” by Virginia K. Logan and Frederic Knight Logan, 1920. The inscription implies this was a gift from the Logans to Mrs. L. B. Schmidt.

“Iowa, Proud Iowa,” pictured above, is a poem by Virginia K. Logan, set to music by Frederic Knight Logan. On the inside cover is a list of Iowa facts, including its pronunciation – “I’-o-wah.” A few other fun facts listed include “First settled near the present site of Dubuque by French, in 1788,” “A leading state in agricultural interests, fine livestock raising, and coal and lead mines,” and “Iowa’s State Motto: – ‘Our liberties we prize, and our rights we will maintain.'” The first verse of the song is as follows:

“All hail! Iowa, Queen of the West!

With her broad rolling prairies so fertile and blest

With Iowa’s beauty no state can compare.”

Another song, “The New Iowa Song: Iowa I Love Best,” was written and composed by Coe Pettit, 1925. It was dedicated to the Kiwanis Club of McGregor, Iowa, which sponsored the publishing of the song. For your reading pleasure, here is the third verse:

So then to realize my dreams, I wandered far from home;

Now since I’ve seen the others, I know what I like best;

I’ll take my good old Iowa, And they can have the rest.”

“Iowa Corn Song,” pictured above, was written by J. T. Beeston with the chorus written by G. E. Hamilton. Beeston was the director of the Za-Ga-Zig Temple All Shrine Band, who played this song in Des Moines and “all conclaves” in 1921. It is also titled “The Official Za-Ga-Zig’s ‘Iowa Corn Song’.” The first verse of the song goes as follows:

“Of all the states in the U.S.A. There’s only one for me,

It’s the good old state of I O A and we’re proud of her by gee,

We’re a bunch of corn-fed shriners, full of mirth and merry jest,

From that grand old land trav’ling o’er the sand,

That’s where the tall corn grows.”

“On a Little Farm in Iowa,” by Fred Howard and Nat Vincent, 1936, is referred to in the sheet music as “the new Iowa Corn Song” and the “state theme song.” It was used by Farm Folks Hour, Hawkeye Dinnertime, and Tall Corn Gang on the Iowa Br0adcasting System. The following is a verse and the very start of the chorus (which is most of the song):

“Yesterday I met a stranger,

Far away from his home town

And his tear filled eyes, made me realize,

How I long to settle down,

[Chorus] On a little farm in I-O-WAY

Where the folks are happy all the day…”

“I’m From Iowa (That Beautiful Iowa Song),” picture above, was written by Alice E. Snow with music by Clifford R. Snow and published in Goldfield, Iowa. The first verse follows a familiar theme:

And the world seems sad to me,

I would give all I own for a note from home sweet home;

From those friends I am longing to see,”

And the chorus also contains something familiar:

Yes she is queen of the west

I’ll say that she is the best

I can hear the cattle lowin’

Out in my home in the west.”

Either “queen of the west” was a common phrase for Iowa at the time, or this alludes back to “Iowa, Proud Iowa.” Either way, it’s interesting. The other theme here and throughout much of this list is homesickness. Clearly, it has played a significant role in the love for Iowa. So many of these songs convey a sense of longing for the author’s homeland, it makes one wonder whether this is common with all places, or if there is something different about Iowa that draws people’s thoughts back here. A discussion for another day, perhaps.

“Flag of Iowa” was penned by Mrs. Laura Wright in the hope of it being incorporated into the classroom in Iowa schools to familiarize students with the state flag. No year is given on the sheet music, as it simply says “Copyright applied for,” but based on information about the flag provided on the back of the music, the design of the state flag was made official in March 1921. Presumably, this song was written not too long after. The first verse is as follows:

You’re the emblem of a noble state. Wave, O, Wave.

For an hundred years she’s battled for the right

And we pledge our allegiance,

We’ll never give up the fight to keep her honor bright.”

Last to be featured here, but by no means least, is “Iowa,” written by Iowa’s own Meredith Willson, 1944. As many from this state know, Willson, who came from Mason City, wrote and composed the Broadway and cinematic hit The Music Man. The song pictured above was performed by none other than Bing Crosby. Here is the introduction and first part of the chorus:

That’s how they sing it in the Tall Corn Song

Other people call it I-“O”-WA

And they’re both just a little bit wrong.

When you say it like we say it back home

It’s the robin in the willows,

You’ll remember it where ever you roam;

It’s the sumac in September,

It’s the squeak of your shoes in the snow.”

Yet another song that harkens back to an earlier song on this list! Several of the songs in the collection use “Ioway” as a pronunciation, though of course no one today pronounces it that way. Mr. Willson has the right of it. And again, there is a hint of homesickness in this song. Oh, what papers could be written on this subject (hint, hint).

Keep in mind that this is only a small selection of the songs in the Iowa Sheet Music Collection. To see more, as well as songs not about Iowa but by Iowa songwriters, stop in and see us sometime!