The ISU men’s track team made history in the 1984 Olympics and showcased some of the best talent Iowa State has ever boasted in this sport.

Three team members made it to the Olympics: Danny Harris from the USA, Sunday Uti from Nigeria, and Moses Kiyai from Kenya.

Both Danny Harris and Sunday Uti took home medals (Harris silver and Uti bronze), and Harris broke his fifth world record in the 400 hurdles during the semi-finals for Olympic trials.

The 1985 media guide for men’s track notes that Harris’s record-breaking times were all the more impressive considering that he was barely 18-years-old during the trials (a sophomore at ISU) and had only run the 400 hurdles 19 times prior to the event.

Here are some pictures of Harris performing at the NCAA competition earlier that summer:

And here is a shot of Uti in motion, likely during a training session at ISU.

Given their incredible expertise, it seems likely that all of these athletes spent much of their time on the indoor track of the men’s gym, pictured below as it would have looked when they were in school.

Sunday Uti graduated in 1987 with his B.S. in Community and Regional Planning.

Unfortunately, it is unclear what happened next to Danny Harris or Moses Kiyai — whether they transferred schools, or simply moved on to other pursuits. I could not find mentions of either in our alumni records.

We do know, however, that Danny Harris set up his own private coaching and personal training service 12 years later in Los Angeles, California near his hometown, Perris.

It is also worth noting that the ISU women’s track team excelled in the 1984 Olympics. In some ways, their accomplishments surpassed those of the men. But because of this, I believe that Nawal El Moutawakel in particular deserves her own blog post, and we can look at her story another day. Regardless, feel free to visit the archives to see any of this material, or any of the items shown above, in person.

**Please note: this article preceded Caitlyn Jenner’s announcement of her name change and gender expression.  Posts published after her announcement, will use her correct pronouns and name.

It’s April 1, so you may think this is a prank, but nope: the famous (notorious?)  Kardashian stepdad appeared in the VEISHEA parade in 1977. 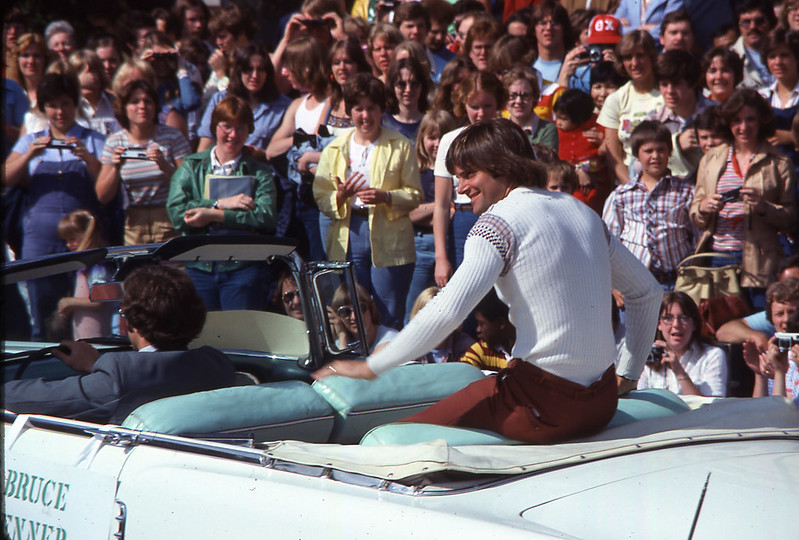 The Olympics are here! Which makes this the perfect time to highlight our very own Cyclone Olympians, information on and photos of whom can be found right here in the Special Collections Department. Originally I wanted to write about all of our Olympians, but there are just too many – we had four in the 2012 London Olympics alone! So, for sanity’s sake, I’m going to feature only our gold medalists. We have had seven gold medalists over the years, six of whom wrestled for the gold, and one who overcame many hurdles for it (literally). Banners dedicated to them currently hang in Hilton Coliseum. Read on to learn about our Iowa State Cyclone Olympic Gold Medalists.

Dan Gable (Wrestling, 149.5 lbs, 1972): Perhaps our most famous Olympian and wrestler, Gable (1971, Physical Education) was one of two Cyclones who won the gold  in wrestling in the 1972 Munich Olympics. He never gave up a single point at the games that year. His college career was stellar as well: he was defeated only once, and that was in the NCAA finals his senior year. Gable came to ISU from Waterloo, Iowa, and wrestled for the Cyclones from 1966 to 1970, becoming a three-time Big 8 Champion (1968, 1969, 1970) and two-time NCAA Champion (1968, 1969). After graduating from ISU, he became head wrestling coach at the University of Iowa, where his star continued to rise as he became the U of I’s all-time winningest coach from 1976-1997.

Nawal El Moutawakel (Track and Field, 400 Meter Hurdles, 1984):
Our only non-wrestling Olympic gold medalist was El Moutawakel (1988, Physical Education), who won the top prize in the 400 meter hurdles at the 1984 Olympics in Los Angeles. She came from Casablanca, Morocco to Iowa State University in 1984. She ran track at ISU beginning that year until 1987. During that time, she won the 1984 NCAA 400 meter hurdle championship and became the second woman to win the Relays Triple (Texas, Kansas, and Drake relays). She overcame real-life hurdles as well while at ISU, losing her father, losing her coaches in a 1985 plane crash, and suffering a knee injury. On a happier note, however, she was not only the first Cyclone woman to win gold, she was the first African woman, Muslim woman, and Moroccan woman to win it as well.

Kevin Jackson (Wrestling, 180.5 lbs, 1992):
ISU’s current wrestling coach, Jackson (1991, Human Sciences), won gold in the 1992 Olympics in Barcelona. Originally from Lansing, Michigan, Jackson started his college career at LSU but when the school dropped their wrestling program, he transferred to ISU as a senior. He red-shirted at ISU during the 1985-1986 season and wrestled in the 1986-1987 season. That season he helped the Cyclone wrestling team win their most recent NCAA championship. Not only is he an Olympic gold medalist, but he is also a two-time World Champion in wrestling. He is one of just five wrestlers in United States history to have three career world-level titles. Jackson took over the head wrestling coach position from fellow Olympic champion Cael Sanderson in 2009.

With these seven and Iowa State’s many other Olympic athletes – including silver and bronze medalists – the Cyclones have a proud Olympic tradition going. More information on our Olympians can be found in an earlier blog post. We also have an entire blog post devoted to Dan Gable. Want to learn more about Iowa State’s wrestling program in general? We have programs, media guides, news clippings, and various subject files in RS 24/12 for your viewing pleasure. If women’s track and field is more appealing, we have news clippings, media guides, and subject files in RS 24/23. The finding aids for these and other Department of Athletics collections can be found here. Contact us or stop by, and we’ll happy to help you out! In the mean time, go enjoy the Olympics. USA! USA!

Iowa State has quite a number of Olympic gold medal winners in freestyle wrestling, including the well-known Dan Gable.  Pictured above is Glen Brand who was one of the first Iowa State alumni to win a gold medal (1948).  He graduated in 1950 in civil engineering.  The original photograph can be found in the University Photograph Collection (RS 24-12-A, box 1963).

The 2012 Olympics are now in full gear – only one week left until the closing ceremonies!  Did you know that Iowa State has quite a few alumni who have competed in the Olympic Games?  (More on how you can find additional information here in the Special Collections Department can be found at the end of this posting.)  Below is a listing of our alumni who have received Olympic medals:

Although it would be too extensive to highlight all the medal winners listed above, there are a few we’ll take not of in this post.  More on current and past Olympians with Iowa State connections can be found in the Thursday, July 26, 2012 issue of the Iowa State Daily.

We should not leave out Ron Galimore from this post.  Galimore (1981 speech communications) was the first African American to be named to the U.S. men’s gymnastics Olympic team.  Unfortunately, he was unable to compete in the 1980 Olympics due to the United States’ boycott of the 1980 Moscow Olympics.  This was due, in part, to the USSR invading Afghanistan.

Nawal El Moutawakel (1988 physical education) has a very impressive list of firsts, in addition to winning a gold medal in the 400-meter hurdles in the 1984 Olympics for Morocco.  She was the first Iowa State woman, the first Arab woman, the first African woman, the first Muslim woman, and the first Moroccan of either gender to win an Olympic gold.  Not only that, she had a perfect 1984 season at Iowa State, and won the gold medal after her freshman year at Iowa State.  1984 was also the first year the 400 meter hurdle race was held for women.  She is active internationally in promoting sports for women, and in 2004 served as Chair of the Olympic Evaluation Commission.  In the 2016 Olympics she will chair the Olympics coordination commission (and her impressive list of firsts continues – she is the first woman to ever chair the Olympics coordination commission)!

Cael Sanderson, ISU student-athlete in wrestling, finished his Iowa State career as the only undefeated four-time champion in NCAA history (159-0) in 2002.  Two of Cael’s brothers, Cody and Cole, also wrestled at Iowa State with impressive records of their own.  Cael won a 2004 Olympic Gold Medal at the 2004 Athens Olympics and was formerly Head Coach of Iowa State Wrestling (2006-2009).

And one cannot forget Dan Gable who won a gold medal in freestyle wrestling in 1972.  More on Dan Gable can be found in a previous blog post.

More on Iowa State wrestlers who competed in the Olympics can be found in a recent Iowa State Daily article.

Wondering about how you can find more information on Iowa Staters who have competed in the Olympics?  The University Archives maintains biographical files on Iowa State students where you can find news clippings and other publications (RS 21/7/1).  Please note that the files on alumni and former students are not comprehensive, but if they made the news there is a decent chance we will have a file with news clippings.  Additional information on the athletic career here at Iowa State of current and former Olympians can also be found in various records found under the Department of Athletics.  Good places to start are often the media guides, programs and news clippings.  Alumni who have gone on to work at Iowa State, such as Cael Sanderson and Kevin Jackson, can be found under the departments where they  worked.  Sanderson has his own collection (RS 24/12/51), which primarily contains news clippings (1999-2011).  We also have a folder of news clippings related to Kevin Jackson under RS 24/3/1.

Photographs can also often be found in the University Photograph Collection, although sometimes you will need to look in other places for images, such as the media guides or the Bomb (Iowa State yearbook).

Occasionally you will find photographs unrelated to the athlete’s sport.  Shown above is a photograph of wrestler Glen Brand (gold medal in 1948 freestyle wrestling).

For more on another Iowa Stater who was very much involved in the Olympics, please see our post on Barbara Forker or the finding aid describing the Barbara Forker Papers.

If you’re curious about other athletes from the state of Iowa who have won Olympic medals, the recent issue (July 2012) Iowa History Journal has an article by Don Doxie, “Olympic dreams blossom in Iowa”.  The periodical is available both in the General Collection (most recent issues in the Periodical Room) and here in Special Collections under call number F616 I59x.  In addition, the July 5, 2012 issue of the Iowa State Daily has a listing of ISU alumni who have recently competed in the Olympics.  Curious about other Olympic medalists?  The official website of the Olympic movement has a database of medalists.

We wish all the current 2012 Olympians who attended Iowa State the best of luck in the 2012 Summer Olympics!