In our film collection, we have a recording that discusses all of this, entitled Black Des Moines: Voices Seldom Heard. It was recorded in 1985, produced by WOI, and produced, narrated, and written by Verda Louise Williams. It’s available on our YouTube channel, and you can watch it here below (approx. 60 minutes). If you have the time, watch it. It reveals a lesser-known side of Iowa and examines the history of African-Americans in Des Moines, featuring interviews with people who lived it.

Admittedly, our collections largely document the white experience – likely due to the fact that most of our population is white. We do, however, try to document diverse experiences, and we have a subject guide devoted to that. Collections directly tied to the African-American experience include the George Washington Carver Collection (please also see the digital collection), the Jack Trice Papers (please also see the digital collection), and the Verda Louise Williams Papers (also linked earlier in this post). In addition, we have relevant records of student organizations and subject files, which can be found in the University Archives Subject Index.

We also have reference files regarding African-American alumni, faculty, and administrators of Iowa State. Contact us or stop by if you have any questions or want to see any of our collections!

It’s African-American History Month and it’s past time that we featured Frederick Douglas Patterson (’23 and ’27) – an alumnus who had a significant and continuing impact on educational funding and college attainment. He is most known for his work with the Tuskegee Institute (now University) and as the founder of the United Negro College Fund (now UNCF).

END_OF_DOCUMENT_TOKEN_TO_BE_REPLACED

Let’s talk about African American history today, shall we? Partly in honor of Black History Month, which is so visible these days that NBA teams have it as a hashtag on their warm-ups (okay…). But also because here at ISU, we talk a lot about George Washington Carver and Jack Trice. Important men in the history of the university, yes! But let’s give our attention to some different faces in Cyclone African American history. 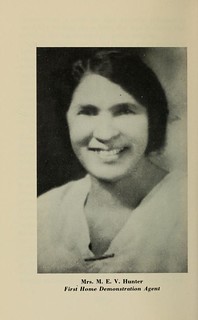 Iowa State’s first African American female student was Mary Evelyn Victoria Hunter. After first earning a B.S. from Prairie View A & M College in Texas, she received a Master’s degree in Home Economics Education (1931).  In Texas, Hunter was one of the first two black agents for the Texas Agricultural Extension Service (1915) and organized an annual, state-wide Home Economics Week. After her graduation from Iowa State, Dr. Hunter became a professor of Home Economics and Department head at Virginia State University in Petersburg, Virginia, a historically black land-grant college. She retired from that university in 1955 and died in Petersburg in 1967.

The link between Iowa State and the Manhattan Project is renown and often-discussed; my colleague Amy wrote about newly processed papers regarding the Ames Lab. The project also has a link to a barrier-breaking scientist and Iowa State graduate. Dr. Samuel Massie, who received a Ph.D. in chemistry (1946), was part of the Manhattan Project Research Group from 1943-1946. His participation in the project came about because in 1943, in the middle of his doctoral studies, he was nearly drafted into World War II before Dr. Henry Gilman stepped in. Correspondence between Gilman and Massie is available in the Henry Gilman Papers here at ISU. Massie ended up serving his country in a different capacity; in 1966, he became a professor of Chemistry at the U.S. Naval Academy in Annapolis and the first black faculty member there. He remained at the academy for the remainder of his career (1993) and passed away in 2005. More about Massey’s life story can be found in the Encyclopedia of Arkansas.

Bonus trivia: Dr. Massie’s wife, the former Gloria Bell Thompkins, was also a professor. The two met at Fisk University and wed in 1947. Mrs. Massie, who had a Master of Arts in Psychology, helped start the Department of Psychology at Bowie State University, Maryland’s oldest historically black university. Massie worked there from 1971 until her retirement in 1993. Bowie State University named a scholarship in her honor.

A more recent graduate of Iowa State University’s chemistry Ph.D. program is James W. Mitchell (1970). He completed his undergraduate coursework at North Carolina A&T State University (1965). After earning his Ph.D. in Ames, Mitchell went to work at the famed AT&T Bell Laboratories. During this period, Michell helped found the Association of Black Laboratory Employees and headed up the company’s Analytical Chemistry Research Department. In 2002, Mitchell joined the faculty at Howard University, where he currently serves as a Professor of Chemical Engineering and Dean of Howard’s College of Engineering, Architecture, and Computer Sciences. Over the span of his career, Dr. Mitchell has garnered a number of honors and awards – and he’s not done yet.

This is merely a drop in the bucket of contributions that African American Iowa State graduates and Iowans have made to society. Also, I would be remiss if I did not point to the Cyclones Athletics profiles of a number of notable African American student-athletes in recent history. Their profiles from February 2012 and February 2013 are available online.

If you are interested in exploring the history and journeys of other African American Cyclones and Iowans, a number of resources are available across the state and in the Special Collections. Contact us  or come visit to learn more.

George Washington Carver became one of the nation’s greatest educators and agricultural researchers. He was born in about 1864 (the exact year is unknown) on the Moses Carver plantation in Diamond Grove, Missouri. His father died in an accident shortly before his birth, and when he was still an infant, Carver and his mother were kidnapped by slave raiders. The baby was returned to the plantation, but his mother was never heard from again.

Carver grew to be a student of life and a scholar, despite the illness and frailty of his early childhood. He first enrolled at Simpson College (in Indianola, Iowa). He excelled in art and music, but art instructor Etta Budd, whose father was head of the Iowa State College Department of Horticulture, recognized Carver’s horticultural talents. She convinced him to pursue a career in scientific agriculture and, in 1891, he became the first African American to enroll at Iowa State College of Agriculture and Mechanic Arts, which today is Iowa State University.

Through quiet determination and perseverance, Carver soon became involved in all facets of campus life. He was a leader in the YMCA and the debate club. He worked in the dining rooms and as a trainer for the athletic teams. He was captain, the highest student rank, of the campus military regiment. His poetry was published in the student newspaper and two of his paintings were exhibited at the 1893 World’s Fair in Chicago.

Carver pictured as Quartermaster (staff officer of the campus military regiment), from the 1895 Bomb (photographs after page 102).

Over the next two years, as assistant botanist for the College Experiment Station, Carver quickly developed scientific skills in plant pathology and mycology, the branch of botany that deals with fungi. He published several articles on his work and gained national respect. In 1896, he completed his master’s degree and was invited by Booker T. Washington to join the faculty of Alabama’s Tuskegee Institute.

Carver’s professional work resulted in the creation of 325 products from peanuts, more than 100 products from sweet potatoes and hundreds more from a dozen other plants native to the South. These products contributed to rural economic improvement by offering alternative crops to cotton that were beneficial for the farmers and for the land. During this time, Carver also carried the Iowa State extension concept to the South and created “movable schools,” bringing practical agricultural knowledge to farmers, thereby promoting health, sound nutrition and self-sufficiency.