This August, I started working as the Curation Services Student Writer here at Parks Library. I have always loved looking at old photographs and documents, so this job has been an absolute blast for me to be working on. One of my favorite things about working this job is doing research in the Special Collections & University Archives Reading Room. While it can sometimes be challenging, finding materials is like a treasure hunt, you never know what you might find in the next folder. Recently, I have been doing a lot of research on the buildings that we have here on campus. Some of the buildings have been here since the beginning, like the Farm House, and others are still being added to! Our University Photograph collection has some amazing images of the campus during its early years, which I find fascinating to look at.

While thinking of ideas for a Facebook post, I thought it might be fun to use a picture of the library when it was first built. I knew that there had been an addition to Parks Library making it what we have on campus today, but what I did not know, was that there have been three additions to the library! The original section of the library was built in 1925, and then the three additions followed in 1961, 1969, and 1983. The 1983 addition to the library created the Parks Library that we all know and love today. While looking through the university photographs for pictures of the original library building, I found some pretty cool photos! 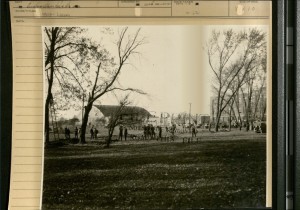 This photo was taken in 1922 at the future sight of the library. In the background you can see Gilman Hall, which was called Physics hall at the time. University Photographs, box 313. 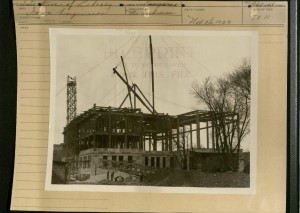 For some unknown reason, I tend to lean towards the older buildings on campus when I am doing my research in the Reading Room. I think that it is just because old buildings are so cool, they have so much potential for fun facts and cool photographs. Whatever the reason may be, one day I decided to look at photos of Old Music Hall. Going into the research, I knew that there was a music hall that stood somewhat close to the current Music Hall, but I had never seen any photos of it or heard any information on it. The building was built in 1870 as a home for professors, and continued to be a home for professors until 1924 when the Home Economics Department took over the building. In 1928, the Music Department moved in, and in 1929 the building was officially known as Music Hall. The Music Department continued to stay in the building until it was torn down in 1978 to build the Music Hall that we see on campus today. 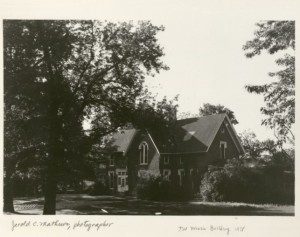 The University Archives are full of crazy cool and weird stuff that you may never know about until you start looking! While it may seem daunting at first, our staff are more than happy to help you get your search started! You never know what you may find once you start looking, you may even have a hard time stopping. So whether you want to learn the history of your favorite building on campus, or you maybe you just want to see what we have on display, stop out and see us! We would love to see you!

The Reading Room is open Monday–Friday from 9 AM – 5 PM.