This is a first in a series of posts about the history of the library at Iowa State.

To kick off this series of posts about the history of the library at Iowa State, we’re going to take a look way back to nearly the founding of Iowa State University. Starting in 1868, the library was housed in Old Main. As Old Main held the entire college, it had a lot of functions including classrooms, museums, a chapel, dining halls, and housing for both faculty and students (to learn more about Old Main, visit our online exhibit). In 1880, the library had 6,000 volumes and was open from 2 pm to 9 pm. The library was run by students in the earliest days until 1876 when some professors were tasked with the double duty of scholarship and running the library. “From this time [1884] the position was added to that of women teachers in mathematics, modern language, or elocution” (pg 80, The History of Iowa State College by Earle Dudley Ross). 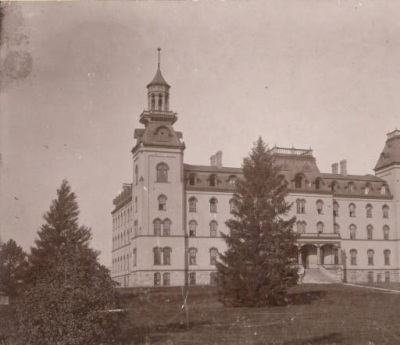 In 1891, the library was moved to Morrill Hall, which was designed to house the library and a museum.  It was in that same year that library instruction at ISU began.  Freshmen took a 1 credit course during the second term titled “Library Work.”  In 1893, the library had 10,200 volumes and was open from 8-9:30, closing over the noon and dinner hours. 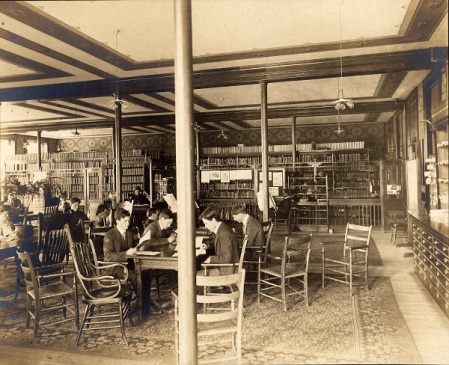 Morrill Hall was the home of the library for just 23 years, and in 1914, the library was moved to Beardshear Hall, which was deemed to be more fireproof than Morrill. The library quickly outgrew all of the buildings it occupied, so plans were laid for the library to have a permanent home of its own that could hold all of the volumes in one place.

In the next post (coming in May), we’ll look at the beginning of the library in its current location (though much smaller than the library of today!)

There are many places in the archives to learn about the history of the library and other buildings on campus.  A good place to start is the online exhibit From Prairie Sod to Campus Cornerstones: Building Our Campus History or the reference books found in the reading room.  You can also check out some quick facts from the library’s website.  To dive a little deeper, look through our finding aids and records in RS 4/8/4.

3 thoughts on “History of the Library”