Today is National Comic Book Day! It may surprise you to learn that we have an extensive collection of comic books here in Special Collections and University Archives. No, we don’t have DC or Marvel, no Batman or Spiderman, but what we do have is pretty amazing. We have a large collection of underground comix (or comics), which are a bit more, shall we say, unconventional. Fair warning: many of them are not for the faint of heart or the easily offended and are meant for a mature audience. These are found in the Underground Comix Collection, MS 636. Just a few examples of the comics we have that may sound familiar: Teenage Mutant Ninja Turtles, Jonny Quest, and Space Ghost. 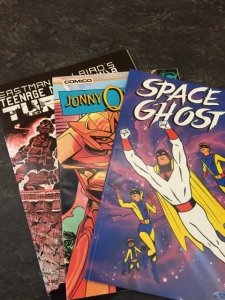 If you’re not a comics fan but any of these titles seem familiar, that’s because they were made into TV shows. Teenage Mutant Ninja Turtles became a craze of the late 80s/early 90s and are popular with kids again today. The comics however, are not as kid-friendly – they are darker and more graphically violent – so keep that in mind in case you want to bring a young fan to see them. Jonny Quest was a cartoon in the 1960s and played on Cartoon Network for a time, and Space Ghost also had a series in the 1960s, along with a parody talk show Space Ghost Coast to Coast on Cartoon Network from 1994-2004.

A peek into one of the boxes in the collection, MS 636.

Zap by Robert Crumb, the inspiration for many other underground comix creators, MS 636.

So, what exactly are underground comix, and how did they come into being? Their origin can be traced back to the 1950s with E.C. Comics – some examples of these are Tales from the Crypt, Tales of Terror, and Weird Science, which can also be found in our collections (see the appendix in the Underground Comix Collection finding aid). They really came into their own in the 1960s and 70s, however, and featured adult themes discussing controversial topics (e.g. abortion, feminism, marijuana legalization) and often mocked conventional society. The comic books were often sold in head shops (shops using book sales as a cover for their actual business of selling drug paraphernalia). Robert Crumb’s Zap is often considered the first real underground comix and inspired many other artists in the genre. The overall culture of underground comix shifted in the late 1980s to include more conventional content by authors who wanted to avoid the restrictions of comic book superpowers like Marvel and DC and create comics with new perspectives. 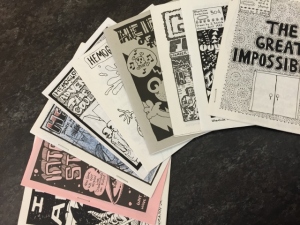 Not all of the comics are in traditional comic book format. Here’s an assortment of smaller comic booklets that are prevalent in the collection, MS 636.

If underground comix sound like your cup of tea, stop by sometime! There are 63 boxes in this collection, so if you have an idea of what comics you’d like to see, that would be incredibly helpful. You may also be interested in our science fiction collection, which I have written about previously. Come in to our lovely reading room and have a read!

2 thoughts on “Not Your Ordinary Comic Books: Underground Comix”