Thirty years ago, rural America was in the midst of a farm crisis, one so significant that it’s often simply referred to as “The Farm Crisis.” During this time, things were so bad that many farmers left their profession and sold their farms. For some, the whole situation was more than they could handle. Those that stuck it out endured a long, hard struggle, one that is far from forgotten in the rural Midwest. The Center for Rural Affairs Records, MS 413, now available for research, contains subject files on the farm crisis and illustrates the work that the Center did to help those affected by the crisis.

How did it all start? It seems there were many causes, not the least of which was a “boom and bust” economic cycle. In the early 1970s, an economic boom in agriculture occurred, and by late in the decade signs of a bust became evident. Loan interest rates skyrocketed, less demand from foreign markets helped drive crop prices down, and as a result many farmers couldn’t pay back the loans they were able to take out so cheaply in the ’70s. The impact on the agricultural community was huge, with farms being sold or abandoned and many people moving to urban areas to make a living. The stress on farmers and their families was horrific. It was the worst economic crisis since the Great Depression, but only the agricultural community bore the brunt this time. 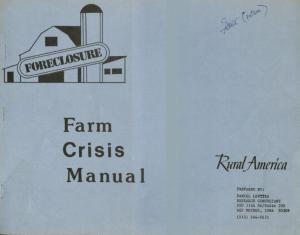 The Center for Rural Affairs (CFRA) was established in 1973 as a non-profit organization to advocate for rural interests in politics and to improve the welfare of rural Americans. Naturally, the farm crisis fit right in to their work (and provided new challenges). CFRA conducted research on how to help farmers get through these tough times and worked hard to change policies that had led to the bust, such as those regarding tax subsidies and cheap credit. Not everyone followed the organization’s recommendations on how to get through the crisis, but CFRA labored to guide farmers and policy makers through it nonetheless. While all of this was occurring, CFRA was working on various other projects, which you can read about in the previous link as well as here. CFRA has kept quite busy over the years with various agricultural issues, and their passion is evident throughout their manuscript collection.

A letter to FmHA from CFRA commenting on proposed changes to the FmHA property management regulations, 1984. MS 413, Box 100, Folder 29

More information on the work that CFRA has done can be found in the collection, along with more information on the farm crisis and many other matters pertaining to agriculture and rural America. Special Collections and University Archives has many other resources on the farm crisis, which can be found in this collections guide. In addition, we have a copy of Iowa Public Television’s 2013 documentary “The Farm Crisis,” also available for viewing here. Stop in and have a look at our resources!