June is LGBT Pride Month. What better time to highlight LGBT-related materials in our collections? Iowa State University strives to provide an inclusive environment on campus, but it hasn’t always been easy. Homophobia was once rampant, not just on our campus, but everywhere. That’s not to say that it’s been eradicated, but overall there appears to be more acceptance today. In the face of the challenges LGBT individuals have faced, several student groups sprung up on campus in the 1970s. These included the Gay Liberation Front (later called the Gay Men’s Rap Group), the Lesbian Alliance, and the Gay People’s Liberation Alliance. 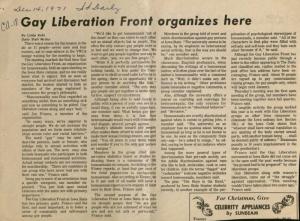 The first gay student group on campus was the Gay Liberation Front, established during the 1971-1972 academic year (it’s unclear if the ISU group was associated with the national GLF). The organization came together to start a gay liberation movement on campus and became publicly visible for the first time in December 1971, with a letter to the editor published in the Iowa State Daily in protest of the play “Boys in the Band,” which was being performed on campus. The letter complained of the production’s “outwardly homophobic attitudes toward the gay lifestyle.” (“30 Years Is Just the Beginning,” Iowa State Daily, April 1, 2002; RS 22/4/0/1, Box 1, Folder 34). Several response letters critical of the initial letter were sent and published. The following year, the group changed its name to the Gay Men’s Rap Group, a name with less of a political connotation. Membership increased drastically from the first year to the next, with around 25 people at the first meeting that second year. A founding member of the Gay Liberation Front, Dennis Brumm, wrote a history of the gay liberation movement at Iowa State on his website, a copy of which we have printed off from 2001 (note: the version in the link above is a bit different than the version in our archive). 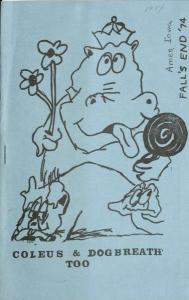 LGBT student organizations existing today on campus can be found on the Lesbian Gay Bisexual Transgender Student Services (LGBTSS) website, along with resources for LGBT individuals and allies. For more information on the history of LGBT organizations on campus, stop by and see the Iowa State University, Student Organizations, Political and Social Action Organizations Records, RS 22/4/0/1. We’d love to see you!