In the time since we celebrated Anson Marston’s 150th birthday in May, another box of materials has been added to his collection, RS 11/1/11. These materials include certificates awarded to Marston, Cornell University class reunion booklets with a photo, news clippings, a booklet of letters Marston sent to his wife from Panama and Nicaragua, military correspondence, and an Iowa State Highway Commission bulletin featuring Marston. Let’s take a closer look at some of these materials. 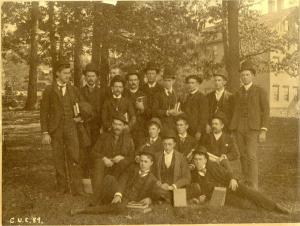 Among the added materials are programs from Marston’s 20 and 25-year Cornell University class reunions, as well as a Class of 1889 photo. In both the 20-year and 25-year programs, he’s listed as working at the University of Iowa in Ames, Iowa. Blasphemy! Of course, it should be listed as “Iowa State College,” since he never worked at the University of Iowa (or “State University of Iowa” as it was also called then). Aside from this, both programs give a brief synopsis of what Marston was doing with his life: serving as “Dean of the Engineering College,” which is also not entirely accurate, as it was a department at the time, not a college.

It seems that by the 25-year reunion, the class secretary was having some trouble recruiting attendees and submissions for the programs. The foreword for the 25-year book reads as follows:

“For the third time, the Secretary has levied toll on the members, of the class of ’89, Cornell University, holding them up at the point of his pen and forcing them to divulge their guilty secrets, to open their skeleton closets for the kindly interest and inspection of the rest of the class. This time, the 25th anniversary of our graduation, seemed to demand an unusual effort in trying to follow the suggestion made at the reunion dinner, that the book should contain photographs of the members, the secretary found abundant opportunity for effort. The following pages show the results and for the interest they may have, the members themselves are responsible. Some of the class apparently are timid; some, modest; and some, ashamed; but they are all members of ’89 and the only regret of the secretary is that there are so many blank records, which he could fill, neither by coaxing, lamenting nor demanding. The rest of the class are the real losers by what must be considered, mistaken sensibilities on the part of a few.”

At least Marston was not one of the “timid,” “modest,” or “ashamed,” as both his photo and a description are included in that program.

Letters from Panama and Nicaragua

A booklet of letters from Marston to his wife cover his travels to and from Panama and Nicaragua from January to March 1931. He traveled there as a member of the United States Army Interoceanic Canal Board, which was assigned to investigate the possibility of building a canal through Nicaragua. The letters discuss happenings, descriptions of the ship and its surroundings, people met, as well as an account of tragedy. An excerpt from a February 26, 1931, letter that Marston wrote in Balboa at the Tivoli Hotel, reads as follows:

“It seems good to get back into a real hotel, although all the trip has been so wonderful.

To day [sic] we went through Culebra Cut in a government tug. Tomorrow evening we are to attend a smoker given by the local section of A.S.C.E. Saturday night the Ames people have a dinner for me.

I like Gen. and Mrs. Jadwin very much. We have just been dining together here at the hotel which is on American territory and therefore is dry, while so many go ‘across the line’ into Panama City to dine.”

“I have spent the day at Gatun Locks and on the Atlantic side calling on Mrs. Jadwin on the transport at San Mihiel, on which she and the body of Gen. Jadwin are sailing for New York to night [sic]. What a terrible experience for her! She and Gen. Jadwin were just about our ages and are much our kind of people. We have been eating at the same reserved table here and I have been getting really acquainted with two very fine people. He has been telling me his plans for an active future and she of their plans for travel together. Their two sons are grown.”

How sad! General Jadwin had been feeling a bit ill the previous two days, and it turned out that he had a small stroke but was expected to survive. Instead, he passed away around 5 p.m. on Monday, March 2nd, of a “large cerebral hemorrhage.” A copy of a letter to Marston from Mrs. Jadwin is included in the back of the booklet, part of which reads:

“I have had many years of sweet companionship with him and I shall try to be brave, as he always was and carry on as he would have me do.”

Aside from this tragedy, Marston’s trip seems to have been a success and quite enjoyable. Apparently, he was very popular too. This excerpt of a letter from R. Z. Kirkpatrick to Mrs. Marston from March 7, 1931, sums up his likeability:

There goes forward to your address today one Dean; we hope he arrives in as good order as he was when he was shipped.

His behavior here has been excellent; while it was all wrong that you weren’t along I really think that he will have little to explain away maritally. At that I think every AMES-MAN here had my experience – – our wives fell in love with your husband; you can easily understand why, from personal experience.”

Letters from World War I

Perhaps the most interesting of Marston’s military letters involve his time serving during World War I. How appropriate, considering that this year marks the 100th anniversary of the beginning of the Great War! Marston was a member of the 109th Engineers, which were stationed in Camp Dix, New Jersey in 1918. In his letter of September 6, 1918, he writes the following:

“I resent being left behind with every fiber and I am not concealing this attitude from [Colonel D.] in the least. Of course I can do nothing but obey the order (when it comes) but I do not want any one in this regiment or in the Dir. staff to think that it is with any least consent of mine that I am being left behind my men.”

Colonel D., whoever that is, had recommended Marston to be promoted to Lieutenant-Colonel, and a major was likely to go over to France, preventing Marston from fighting in Europe.

At some point in the fall of 1918, Marston left the 109th and by December was stationed at Camp Leach, Washington, D.C. In his letter of December 2nd, he has changed his tune a bit about being left out of the fighting overseas:

“The U.S. casualties in France when compared with the number of Infantry we had on the actual fighting line show that an infantry-man on the front for 4 mos had a very slim chance of escaping. It was evidently mostly a question of getting wounded or killed.”

If this is the battle I think it is, he was very fortunate indeed to not have been sent over. The casualties in France mentioned were likely part of the Meuse Argonne Offensive, particularly in mid-October. The timing is right, and the US army suffered heavy casualties at that time and place. More information on the Offensive can be found here, a great jumping off point for more research for those interested.

Believe it or not, there is much more where this came from, so stop by and see what the whole collection has to offer!