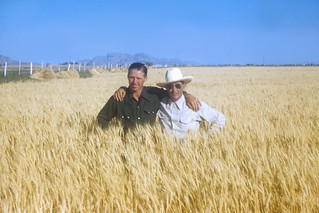 March 25, 2014, marks the 100th anniversary of the birth of Dr. Norman Borlaug, one of the most famous plant pathologists of the 20th century. It also marks the unveiling of a statue of Borlaug in the United States Capitol’s National Statuary Hall, where two notable figures from each state are on display.

Borlaug was born in Cresco, Iowa, and raised on a family farm. He received his degrees from the University of Minnesota, a B.S. in forestry in 1937 and a Ph.D. in plant pathology in 1942. After two years as a microbiologist with E.I. du Pont de Nemours & Company – commonly known as DuPont – Borlaug spent 16 years in Mexico as the Rockefeller Foundation’s Associate Director of Agricultural Sciences. He later worked for the Food and Agriculture Organization of the United Nations and the International Maize and Wheat Improvement Center, also known by its Spanish language name Centro Internacional de Mejoramiento de Maiz y Trago (CIMMYT). In later years, Borlaug joined the faculty of Texas A&M University and established the World Food Prize, a Nobel-like award that recognized innovation in food production that advance world peace. The World Food Prize Hall of Laureates is located in Des Moines.

Borlaug’s litany of prizes for his efforts is a long one. He won a Nobel Peace Prize in 1970 for his work developing high-yield, disease resistant wheat. He also received the Presidential Medal of Freedom in 1977 and a Congressional Gold Medal in 2006, the highest civilian awards in the United States. The National Science Board presented him with the Vannevar Bush Award for lifetime achievement in 2000. Upon his death on September 12, 2009, figures as varied as several United States presidents, Indian prime minister  Manmohan Singh, King Bhumibol Adulyadej of Thailand, and United Nations Secretary General Kofi Annan paid tribute to Borlaug’s vocation of reducing world hunger. Locally, the Borlaug Learning Center on Iowa State University’s Northeast Research Farm honors Iowa’s native son. 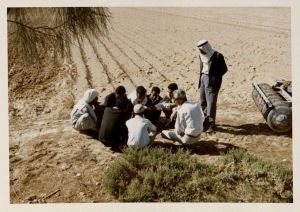 A crowd of men, possibly in Lebanon, learn farming operations through an interpreter. MS 467, box 13, folder 55.

Here at Iowa State’s Special Collections and University Archives, we hold 28.6 linear feet of Borlaug’s correspondence, with a small amount of photographs and lecture materials.  More information on MS 467, the Norman E. Borlaug Papers, is available online. Borlaug’s alma mater, the University of Minnesota, has digitized its holdings of his papers, available online here. Still more records are available at Texas A&M University, including recordings of oral history interviews with Borlaug, and at the Rockefeller Archive Center in Sleepy Hollow, New York. Considering his global vocation, it comes as no surprise that Norman Borlaug’s records exist in a number of locations as well.