Today, August 26th, marks the 90th anniversary of the 19th amendment becoming law, giving women in the United States the right to vote.  What might Iowa State have had to do with women gaining the right to vote back in 1920?  Carrie Chapman Catt graduated from Iowa State in 1880 at the top of her class.  Catt worked diligently for woman’s suffrage both in the United States and internationally, and was the president of the National American Woman Suffrage Association (NAWSA) when the 19th amendment was passed.  In fact, she was president of NAWSA for many years and came back to the presidency in 1915 to reorganize and strengthen the association.  After the 19th amendment became law, she then helped organize the League of Women Voters.

Several archives hold the papers of Carrie Chapman Catt, including ISU and the Library of Congress.  Microfilmed versions of some of these collections are held in the library’s Media Center and can be found by searching the library’s catalog.  The Library of Congress also has some of her papers online.  We also have a collection of her papers, and the finding aid for her collection is online.  Below are some of the highlights from her collection here at ISU, which contains some materials from when she was a student here as well as when she was working for woman’s suffrage.

Pictured here are a couple images from Catt’s botany notebook, which contain careful notes and illustrations in her very neat handwriting. 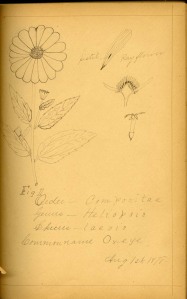 In 1921, Catt became the first woman to deliver a commencement address at Iowa State.  The collection contains a newspaper article announcing Catt’s visit to Iowa State, and also a copy of her address which was published in The Alumnus.  The news clippings also reveal that Catt maintained ties to Iowa State, visiting her alma mater at least once during the fight for suffrage in 1917.

In addition to the materials in Catt’s Papers, we also have a number of artifacts which Catt once owned.  Most of these are suffrage buttons and pins, a few of which are pictured below.

If you would like to learn more about Carrie Chapman Catt, please visit our finding aid and the Carrie Chapman Catt Girlhood Home and Museum website, which also contains links to other collections of Carrie Chapman Catt materials and an interactive time line.  There are quite a number of online resources related to the suffrage movement, including a fun online scrapbook which contains articles, letters and editorials from The New York Times about the women who fought for and against suffrage here in the United States.

3 thoughts on “Did ISU have anything to do with the 19th Amendment? Why yes it did!”