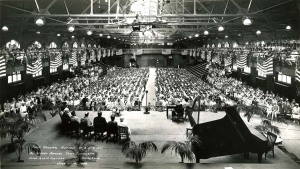 Programs for the boys' short courses

This week, starting today, over 1,000 4-H members will be coming to the Iowa State University campus for the State 4-H Conference (June 29-July 1).  The history of the state 4-H conferences has been tied to the Iowa State campus since at least 1916, since the state conference (then called a short course) was held here at Iowa State in 1916. Then, as now, faculty and staff here at Iowa State actively took part in the state conference. In fact, on Wednesday and Thursday of this week, our collections archivist will be giving a workshop and tour of our department for State 4-H Conference attendees.

The Special Collections Department here at Iowa State University holds records documenting the history of 4-H, especially here in Iowa. One can even find out a little about the history of Iowa’s state 4-H short courses, conventions, and conferences by just looking at the conference programs.

Programs for the girls' short courses and convention

The  short courses (patterned after the Extension’s short courses for adults) began around 1916.  The year 1916 is used since this is the first short course program for 4-H members in our collection. More digging in the archives is necessary to find out if this is actually the first year an annual meeting was held! It is interesting to note that the 1916 Junior Short Course was for both boys and girls, although with separate programs for each. There was a home economics program for girls, which included cooking, literature, recreation, first aid and an excursion to the dairy building.  The boys attended an agricultural program which included lessons on construction (concrete floor and electric wiring), soils, sheep and pigs, first aid, and the use and care of farm machinery. The 1916 Junior Short Course was held January 31 through February 5 in Morrill Hall.

Program for the 1916 Junior Short Course 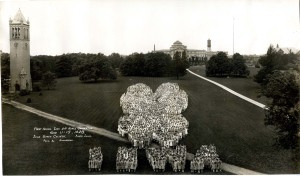 The first conference (then called a convention) held in 1928. For many years, the group photo of the girls attending were in a formation. The caption reads "First Annual Iowa 4-H Girls Convention, June 11-15, 1928, Iowa State College, Ames, Iowa."

The first actual convention for girls was held June 11-15, 1928, and it appears that this was the first time the state meeting was held in June.  The boys continued to hold short courses (except for a brief period of time when they had short courses and a convention in the late 1930s and early 1940s).  Another interesting aspect to note is that when the girls started having conventions instead of short courses, the annual meetings for boys and girls usually did not fall on the same days.  Sometimes the boys had their meetings in June, and at other times in midwinter as before. Finally, the first State 4-H Conference, for both boys and girls, was held June 12-15, 1962.

There’s a lot more that could be learned from looking at the state 4-H meeting programs, but I’ll stop here. Come and visit us if you would like to learn more.  Please note, however, that for now, the collection where most of the programs reside (RS 16/3/4) is in the process of being put together for public use (what archivists call processing), but if you ask we can bring the boxes out for you to look at. Most of the finding aids for processed 4-H collections can be found online: http://www.lib.iastate.edu/spcl/arch/inventories/16extension.html. Scroll down past the Extension collections for the 4-H records, which include historian books and other records for Story County 4-H, record books, photographs, and scrapbooks. 4-H records can also be found in the records of organizations and individuals involved in 4-H, such as the Burchett Papers which were described in earlier posts.

2 thoughts on “State 4-H Conferences: conference programs and the history they tell”